Twenty-three days we had together. Such fun, caring & sharing our doggie life.

Her human had been away golfing but he joined us for the past week of fun and frolics. Our usual Hook haunts such as Slade Harbour etc. but also Forth Mountain. Duncannon beach. Johnstown Castle (again!) to name a few.

Hallie and her human were here at the weekend too so it was great fun altogether.

But alas all good things must come to an end. And it all seems very quiet here this evening. Nothing for it but to post some fun photos and enjoy dreams of my peacock days.

A wood pigeon lives in the tree behind our house. She looked on enviously (but not quietly) as we enjoyed a yummy barbecue with neighbours on Monday. Glasses were raised in thanks for summer fun and wishing luck to E for her return to school.

Between courses we played a few games of ‘Corn Hole’ … until the light faded too much for us to see. At the start Missy didn’t like the thudding noise and screeches of excitement when a 3 or 5 was scored but she was well used to it & wanted to be in on the action by the time darkness fell.

Here’s a link to the game if you’re not sure what it’s about. Suits every age group.

The next day we went walking in the forest by a river … sooo exciting! 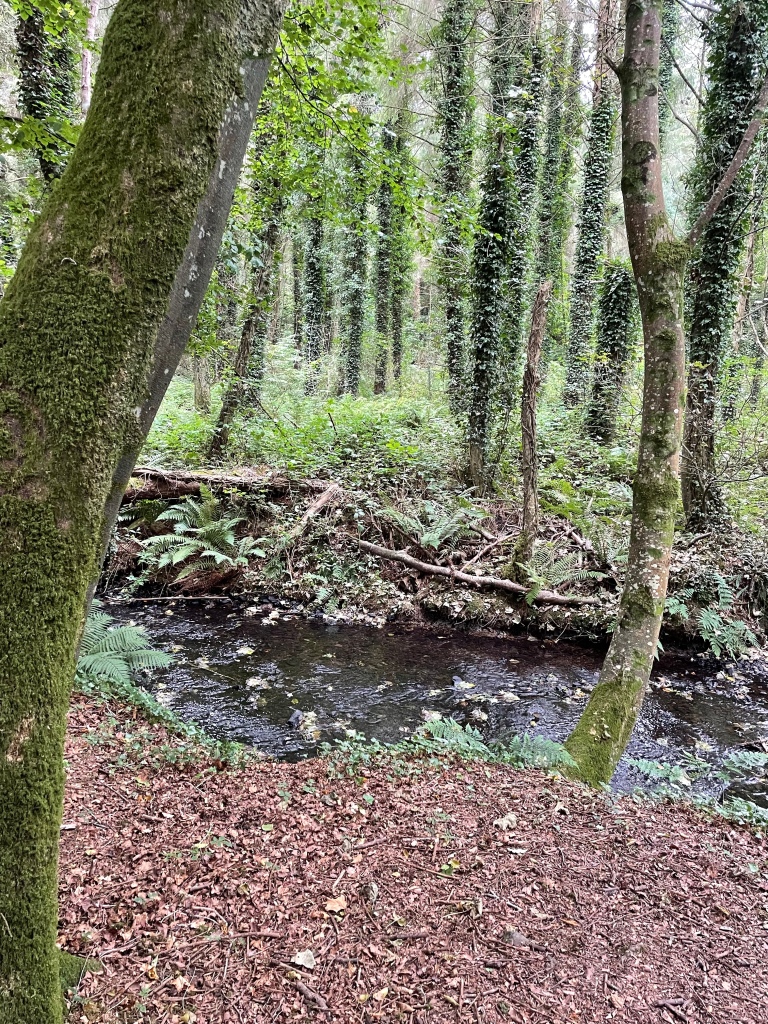 It was back to the beach on Wednesday and today. Blissful!

We are resting on the couch this afternoon. 💤

Yesterday we all went to the wonderful Johnstown Castle in Wexford for an afternoon out. Such a beautiful place. Very dog friendly although all 3 of us madraí had to be kept on our leads throughout.

The castle itself is immense. Huge! but we didn’t go indoors but I spotted an ancient rocking horse when we looked in one of the ground floor windows.

Missy launched herself into the first fountain we saw so I joined her. But Hallie was having none of that splashing nonsense.

We met lots of friendly people many of whom had dogs in tow so it was a sniffers delight all afternoon.

My human had her photo taken beside the statues at one of the follies. but we only had eyes for the peacocks who were strutting around the place. We’d love to have given chase but were constrained by the humans.

While strolling around the three well maintained, litter-free lakesides we circled some hissing swans being very protective of their young. After that we mooched around the walled garden for a bit.

The grounds had a mixture of massive trees of dizzying heights. I imagined the things they must have witnessed down through the years. I bet they could tell a story or two.

The largest lake was wearing a serious amount of green algae. I never saw anything like that before. Had to be seen to be believed.

We also came across a private graveyard tucked in behind a fabulously ornate gate.

At the end of our tour the humans stopped for coffee and we dogs all had a welcome drink of water from one of the many bowls left down for that purpose by the café staff. All in all a wonderful day out. We were tired. Slept well last night.

I love being a dog. I wonder what excitement today will bring?

I’ve been forgetting to mention my music recommendations in the last few posts but today it simply has to be ‘Castle on a Cloud’. The Isabelle Allen version. I think the opening sounds are particularly apt. 🎼

The human was very busy today … so no photos/videos. But don’t worry she made sure we had beach time. The weather is spectacular and she tells us that our friend Hallie will arrive tonight.

My visiting cousin Missy is the boss. At the bowls, the bed & the beach she reigns supreme!

But I’m learning. And I WILL get the hang of this ‘being in charge’ lark.

Missy is still enjoying her holiday. It’s a nice mix of activity and rest. We had brilliant craic stick-chasing at the beach yesterday. Because of the sunny weather there were a lot of people on MY usually-private beach (😉) but we found a good spot to play at. And after that we went over the rocks to a quieter place for further excitement.

I noticed that the human was hiding extra sticks inside her T-shirt. I think that’s because Missy murders at least one branch a day by chewing, banging, biting, burying and rattling and we need to have some on reserve to keep her happy the following day.

Have a look at our videos. No prizes for guessing who the boss is in this relationship!! 🐾

Missy is here. On her holidays. She’s my cousin. For the foreseeable future I will be sharing my bed, my walks, my food, my water-bowl and my human with a Patterdale Terrier. She’s a very busy dog. I love having her here but I think I will be worn out by the end of this.

So far today (and it’s only 2pm!) I’m at about 40,000 steps… if my human’s step counter is anything to go by. We’ve been beach-walking, beach-combing, swimming, stick-chasing, rock climbing & gardening.

What great weather we are having. My daily trips to the beach are lifesaving in this hot weather. Today we had it all to ourselves.

PS. Our song of the day is … ‘In the summertime’ by Mungoe Jerry.

Enjoy life wherever you are.

Hi all. Just a quick note to say I’m back!!… and the human is with me. I got her through all the lockdowns safely and together we have reached this wonderfully sunny day, 1st June, 2021. (I’ve heard her say she’d never have survived without me.)

Watch this space for updates in the coming days & weeks. I have so much news I don’t know where to start. So I’ll think about what story to begin with & I’ll be in touch then.

In the meantime enjoy this photo from my current #staycation address in the sunny south east. My very own Amalfi coast!!

Today’s music choice is ‘When we’re together’ the Mona Lisa Twins version… because I love being with my human. it’s my happy place. But mostly all the songs from that album are right up my alley. Bye for now ….. 💕