It started off reasonably well. Usual parking space, tucked in tight to the farmer’s wall. Bounded from the boot. No other cars. No lead required. Glancing down from the brow of the slope, the tide was way out & there were no obvious beach walkers – this promised solitude for the human & glorious freedom for me.

Mmmmm…. Okaaaay…..We were mysteriously joined by Fred the seal-dog on Cove One. Dunno where he popped out of. Doggie playtime ensued until he was summoned by a resounding human whistle from above. Back he went as we ventured forward.

When we reached Cove Two I saw a bright orange object approaching from the water. Buoyed by the waves, its size was difficult to determine but the nearer it got, the larger it became. Soon I was able to identify that it had a multicoloured, bobbing crown.

By the time we reached Cove Three the mysterious phenomenon had changed course and was rapidly progressing towards the sandy beach. Shortly thereafter, it paused, 6 individual jewels of its crown took on a life of their own, popped off the hindquarters, into the wavy water and proceeded towards shore at the far end of the bay. One dark, moving part remained attached to the carrot-coloured shell.

Not sure if this new presence might be threatening, I continued to observe cautiously & we both proceeded with care. They started shedding their glowing outer skins, each revealing sleek & shiny black coats, not badly unlike my own – but less hairy. And then ….I realised they were human, had merely removed their life jackets and were spreading out on the rocks in their wetsuits for a picnic. Duh!!

My human chatted to the Mama picnicker momentarily but my interest in the kiddies’ sandwiches convinced her that we should do an about-turn and head back towards Cove Two. Well what do ye know?! There was another intruder approaching there. I realised that this one was a boat; a small, white vessel, with two fishing rods cocked straight up into the air, seeking a spot to come ashore. We stood & studied them. They waved. She waved back. I barked a ‘hello, but could you not find somewhere else to land?’ questioning sound. Interesting and all as they might be to meet up with & chat about local mackerel & pollock stocks, it might mean I’d be put on the lead & there’s not much fun in that kind of restraint on a beach.

Back at Cove One on our return journey the skies cleared & the sun beamed down BUT if there wasn’t another punt beached in the sand. No evidence of life around this one but I wondered if it was a sign of things to come. Sloops in every cove? Hope it won’t curtail my freedom & exuberance. 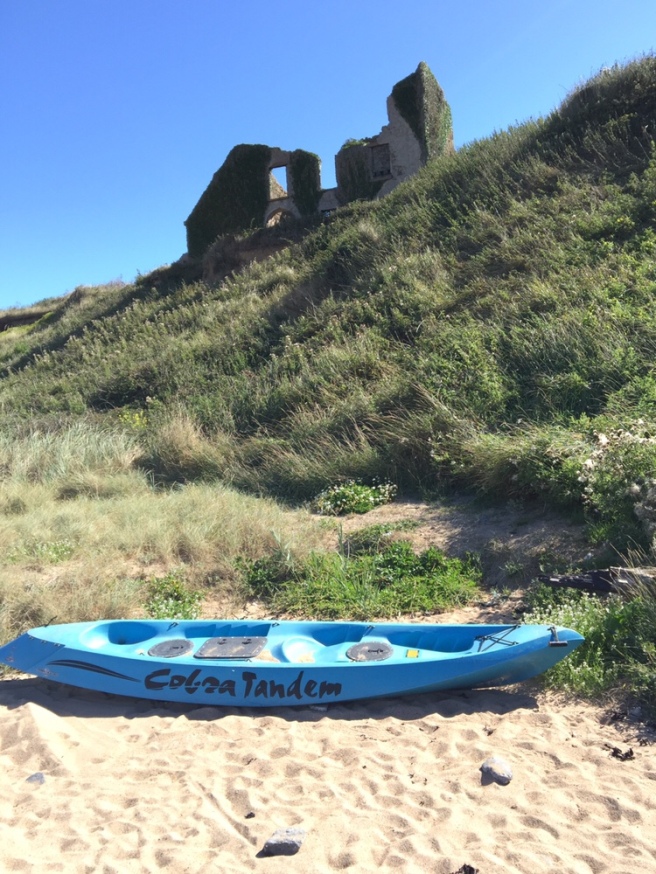 Back to the boot & homeward bound I presumed (no! I’m not going to choose that song today😂) but as we were leaving the laneway our 🚘 turned right instead of the usual after-walk left. Mmmm. This could be interesting. Soon we passed the sign for the harbour without making the turn, which intrigued me. Oh man!!! We were headed for the lighthouse & cliff walk. Brill!

My human offered to take a photograph for a French couple who were using a complicated looking camera. But oh! She got it wrong. Great one of the lighthouse but the people were missing😂 …tried again. They seemed happy.

On we went along the cliffs (me on my newly purchased, elasticated, comfy lead but I didn’t mind being under control- simply delighted to be there). The waves were just right; lots of sound but at a distance & not threatening-looking. The sun was shining, everyone we met said hello & smiled. (‘Miles away from Twitter-land’, I heard a passerby comment.)

My human took time out to greet a visiting couple. They had stayed at a renowned local hostelry overnight and had a thoroughly enjoyable experience. Well! they went on to have a looong conversation about the locality, things to do & see, & their chit-chat even included all about ME! (The usual rescue/surrender/well-behaved/delighted with him/he blogs etc … palaver). I behaved very well for the duration. A lovely couple. Something tells me they will return to the area.