I’ve been feeling a bit forlorn these past couple of days since Missy & Hallie left, to be honest. Having the bed all to myself isn’t all it’s cracked up to be 💤 However, I feigned much delight when herself made moves towards the 🚘. A change is as good as a rest as they say & it’s good to be outdoors even if it’s raining.

I spied a new ‘friend’ on the slipway as I arrived and we met half way. His name was Bob & he had the look of a British Bulldog

‘His tail is wagging so they should be fine’, chirped my human delightedly as we converged. (OMG she says that every day to one dog owner or another).

‘Bob doesn’t have a tail to wag’, replied the other lady, laughing.

Meanwhile, us canines were becoming acquainted in a doggie sort of way. I was liking what I smelled. Next thing I know, we’re moving in opposite directions as our humans take control and propel us in a guidance of their own choosing. I gazed longingly at his squat little bottom waddling upwards but had no choice but to follow ‘herself’ downhill!

The whale-like mounds of ocean weed had reduced slightly overnight but we still ran the risk of sinking or sliding. Once I had carried out my business & filled a poop-scoop-bag to the brim, we picked our steps carefully along towards Cove Two. Then!, just at the narrowest junction between the coves, up pops the gorgeous Ollie, a Cockapoo, in the company of his three humans.

‘His tail is wagging so they should be fine’, chirped my human delightedly. (OMG did I mention that she says that at least once every day). They proceeded to chat about rescue/surrender/breeding/crosses/size/temperament/training/freedom…… etc….. before parting company.

Cove Three is where I miss Missy and Hallie most. It’s difficult to muster up enthusiasm for running when I’ve no pal to chase or be chased by. An empty beach hasn’t quite the same appeal as a stick-fishing expedition. Nonetheless, I wandered about the place at a lesser speed than usual & found plenty to exercise my mind. For instance…what the heck happened this rock? Was it by human hand or ocean spray that these holes developed, I wonder? 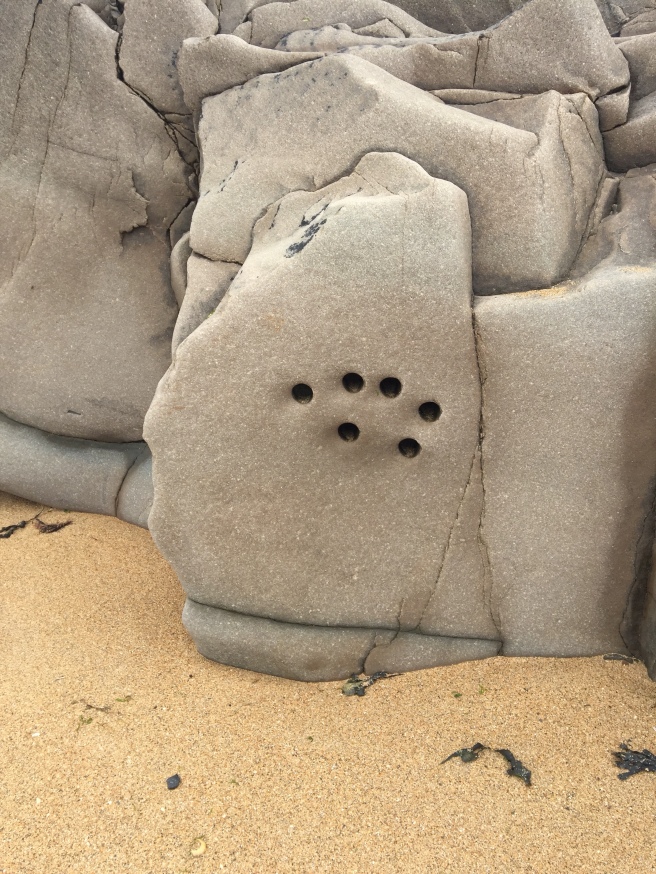 Maybe Missy or Hallie left a coded message for me? Just then the rain became much heavier & we headed briskly back towards our transport.

Jim Reeves sang us home with ‘Am I that easy to forget?’🎶 And I had tears in my eyes wondering if my doggie companions of the last few weeks have forgotten me altogether 🙁 🐾

One thought on “Am I that easy to forget?”