I thought swans were BIG! If you recall I saw swans for the first time ever in my life last week at Ladeston Lake. And I got up quite close for my inspection of them; twelve swans, all in pairs, waddling ashore in search of someone’s leftover picnic bread.

Well that was before I saw a kitesurfer. They are gargantuan. The first one I saw was at rest. Just lying there on the beach, rustling in the breeze & minding her own business. Her undulating wings & captivating colours of mostly orange & green were bordering on hypnotic to my doggy eyes 👀

It was obvious from the surrounding human footprints in the sand that she was in a deep sleep. I approached cautiously. What I hadn’t noticed initially was the spidery strands that attached her wings to her body which was about 100 metres away.

As I looked on, her distant little body woke up and unfolded itself in the direction of her snoozing wings. After a quick wake-up shake (not badly unlike me when I get out of the water) her wings found an airflow and magically began to launch.

Before long she took triumphant flight out over the estuary …. and promptly dropped into the water. She tried again. And again. And again. Her wings must have been gaining weight at this stage but she was aloft once more & headed for the safety of the cliffs. Oh no… a human came running down the beach gesticulating frantically & calling out instructions to her…

GET AWAY FROM THE CLIFF!!

I don’t think she could hear though because the wings were moving rapidly towards a rocky outcrop.

At this stage my human started walking in the opposite direction and my only choice was to tear myself away from the kitesurfing spectacle and follow the lead. There were other fascinating things to see, such as what my human says was a rather large jellyfish. Well I never saw a jellyfish before so how am I to know? Eh???? 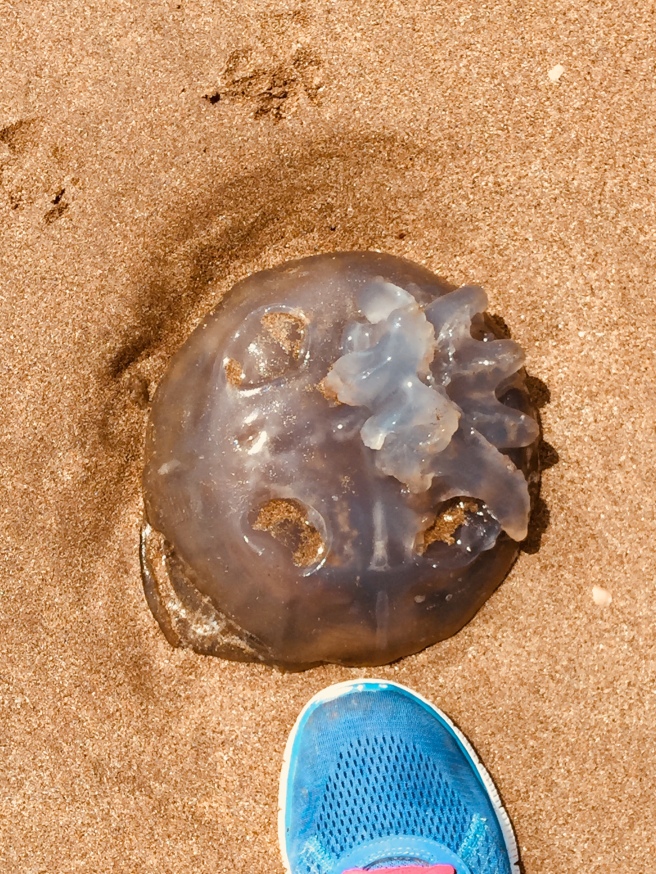 When we returned to TCTTIASUV I thought I saw a kitesurfer heading in the direction of Co. Waterford, but who’s to say it was my orange and green one….